The coral reefs of Mauritius are home to several magnificent organisms. Various creatures like fish, clams, sponges, starfish and turtles grow and depend on the coral reefs. The colourful scissortail sergeant fish swims in schools close to coral reefs mostly everywhere in Mauritius. Around the atolls of St Brandon, sea turtles thrive away from the human population. Where reefs are absent in Mauritius, oftentimes sharks glide into the lagoon. Here I’ve used various colours to show how colourful our reefs can get. Nature itself is beauty. The reefs provide food to these marine creatures as they are hotspots for marine life. As small organisms feed on the microscopic algae that grow on the reefs, larger animals eat them. In this way, an intricate marine food web exists around the coral reefs. coral reefs play a key role in protecting the coasts of Mauritius against violent waves, tsunamis and storm surge. They are also important grounds for marine creatures to reproduce and grow. , the tourism industry of Mauritius is based on beach travel. Tourists fly from all over the world to Mauritius for its white beaches and calm lagoons. Without the protective coral reefs, Mauritius’ tourism would greatly decrease. 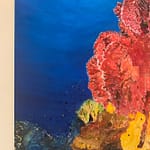