My artwork depicts a topographical view of the island of Mauritius with an accentuation of its pristine sandy lagoons, all encompassed in a protective “bubble” which is the biosphere represented by the round shape.
The island’s beautiful greeny and shimmering undersea with its aquatic plants are emphasized upon which convey a sense of tropical paradise that the island is renowned for.
On the south-eastern aspect of the island is a departure from the idyllic scenery. The unprecedented grounding of an oil tanker – the MV Wakashio – spilling an estimated one thousand metric tonnes of crude oil off the shoreline of Mauritius. An incident that could have ushered the island into a perpetual black tide, thereby eradicating a plethora of endemic fauna and flora, not to mention jeopardizing the tourism industry that the country thrives upon.
Finally, a message of hope. Around the oil slick, the mooring buoys are lain in the shape of a heart; illustrating the Mauritian spirit and the coming together of Mauritians from all wakes of life to serve a singular goal – saving the island from an Ecological disaster. Hence, “Eco-bubble” not only describes the protective bubble created by the Indian Ocean’s topography, but also hints at the defensive shield created by the Mauritians. 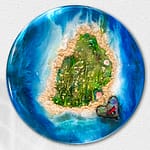