The Kraken, from Scandinavian mythologies, is a legendary octopus-like sea monster of enormous size known for destroying ships while causing tremendous waves. My referance to this mythical creature is about humans way of living, which causes destruction, be it on earth or in the sea. Hence , my submission entitled ‘The Kraken’ depicts a human, wrapped in plastic, extending his multiples arms and causing destructive actions to our oceans and its inhabitants. We can notice marine creatures trapped in a net, a factory releasing toxic substances in the sea, fishes made of plastic, whitened corals, Wakashio spilling heavy oil, the remains of the famous tree of La Prairie, and even Elon Musk flying away from Earth. Except for the main character which is my photograph, all the other elements are obtained from Unsplash.com, an internet source of freely-usable images.
‘The Kraken’ has a surrealistic feel yet narrates the sad reality of our oceans. 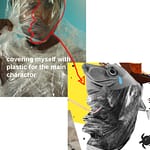